The Chorus began in 1999 with six enthusiastic women from Lennox Head answering a newspaper ad. Under the direction of director and founder, Jen Squires, the word spread, numbers grew and they elected their first Management Team. With Gwen Taylor as their first Team Coordinator they became the prospective Lennox Headliners Chorus.
Big sister Gold Coast chorus and their director Alexa supported their early efforts and soon they were performing locally. One of their performance highlights was singing for the Ballina leg of the Olympic Torch Relay in 2000.

By 2002 with 16 members they sang for evaluation at the Wollongong Convention and the first chapter quartet ‘Collusion’ competed as well.

On 15 June 2003 The Lennox Headliners Chorus received their Charter with Sweet Adelines International and celebrated with a joint concert with friends Brisbane City Sounds.

They competed for the first time as a chartered chorus in Adelaide in 2004 with just 15 members on stage, then again in 2006 – this time closer to home in Brisbane.  'Cruise' quartet also competed this year, making their debut as the highest scoring novice quartet.

Steady improvement led to their first ribbon – 3rd placed small chorus – at Brisbane Convention 2007.   The chorus is not all about competition though. They also love to put on a show and entertained audiences with their original productions “Girl’s Night Out” (August 2005) and “All Aboard” (April 2008).

In 2008 the chorus voted to change its name to Headliners Chorus to better reflect the wide area their membership now covered. The numbers grew steadily, to over 30 members under Jen’s enthusiastic direction, with assistance from assistant director Justine Cox, TC Lynn Macdonald and the music & management teams.

Jen announced on her return that she would not be renewing her contract, and would be moving to Perth to pursue a formal university degree in music.

In May 2009 the chorus celebrated its 10th birthday with a short concert followed by afternoon tea, attended by about 150 people. Some of the original members of the chorus were there to help celebrate the occasion. This was also the Dress rehearsal before the trip to Hobart for Convention.  This performance in Hobart resulted in the chorus being placed 4th in the Small Chorus Division with a score of 487 placing them in the B- category, a proud moment.

The next event of the year was a farewell for founder and inaugural director Jen Squires held at the Ballina RSL. The chorus had grown steadily under her directorship over the 10 years .

Cathy Gordon was welcomed enthusiastically as the new musical director, after the Hobart Convention in May 2009 and the group was very excited by her immense passion for music and looked forward to continuing to grow under her leadership.

They enjoyed a coaching workshop with Lea Baker, a number of performances around the area including Alstonville, Bangalow, Ballina and Mullumbimby and a busy Christmas caroling schedule at local shopping centres, River St Ballina and at Carols by Candlelight in Lennox Head.

On 10 September 2009, the Chorus was delighted to sing for the wedding of Chris and Justine (the Assistant Director).

In early 2010 Cathy completed the Sweet Adelines Director’s Certification Program with one of the highest scores recorded in the country. She received her Certificate from renowned Australian Sweet Adeline – Lea Baker.  The Chorus also presented her with a Certified Director’s Pin.

The Chorus again took part in many performances around the area. The Biala Debutante Ball, Rotary Shelter fundraiser in Alstonville, a busy Christmas caroling schedule at local shopping centres, and Carols by Candlelight in Lennox Head among them.

The ultimate performance for this year was definitely the show in Bangalow on 4 September 2010, “BROADWAY AND A WHOLE LOT MORE”. Renowned Australian Jazz Singer Sharny Russell was a special guest artist. Headliners performed to a sell out crowd and the prolonged standing ovation at the end of the show made all the hard work that went into this production worthwhile.

2011 was one of the best yet for the Chorus.  Within the community, they raised the bar in all areas and their name, popularity and public recognition spread further afield.

Members were very excited, and for some very relieved that after 7 years of saving they were able to replace their heavy old choral risers with NEW, much lighter and easier to manoeuvre Sico risers.

Preparation for Convention in Newcastle in May was a major focus for 2011.  To assist in this the Chorus enjoyed a fantastic coaching workshop with Sharon Stanley in March, with a return visit in April to energise them even more, before the trip to Newcastle.

The year concluded with many memorable performances across the region, including a “Christmas Spectacular” at Ballina RSL Club, joined by Gold Coast sisters in song ‘Harmony in Paradise’ chorus.

In preparation for the Canberra Convention, Headliners ‘retreated’ to Lennox Head for a weekend full of workshops, then staged a very successful “A Capital Act” concert at Ballina RSL Club.  In May they ventured to chilly Canberra to again sing with Sweet Adelines friends from all over Australia, coming home proudly with a 4th placing in the Small Chorus section. 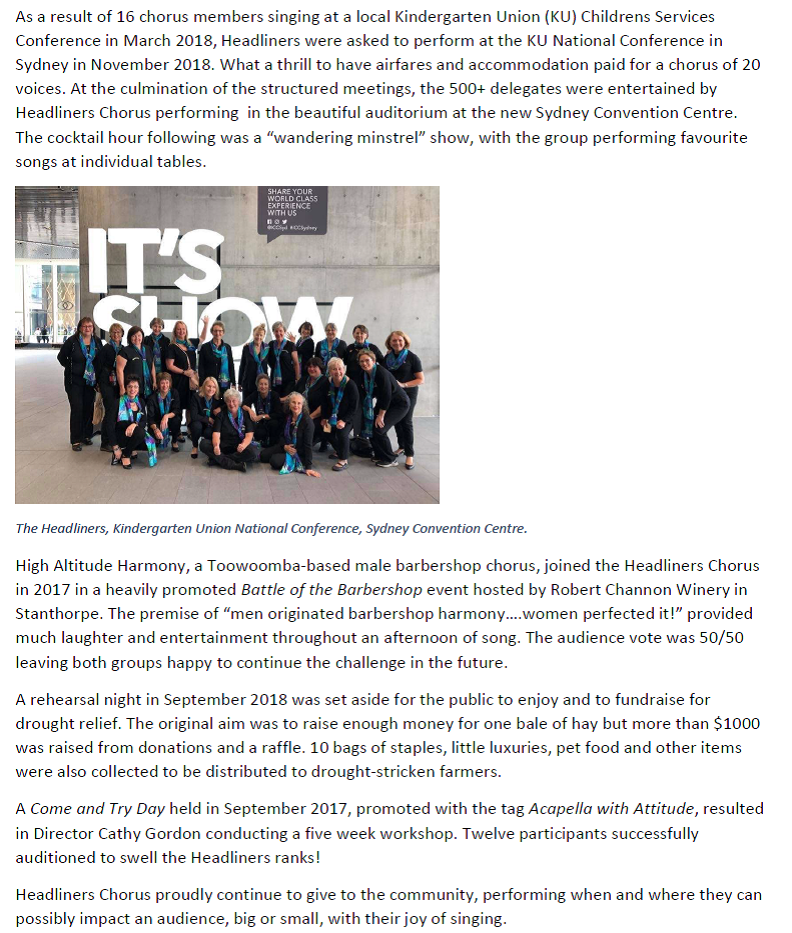